CK2 Console Commands and Cheats.. Crusader Kings 2 is a game you do find difficult to enjoy. It is as grand as grand strategy games gets and much more steep compared to the likes of Europa Universalis 4. The game kicks off in the Middle Ages where players gets to choose a ruler and by so doing, they’ll be tasked with taking charge of that person’s affairs until the day they die.

Now assuming you’ve got a successor prior to this event, you will be able to take control of them. The game ends when you run out of heirs or when all landed titles are stripped from the members of your dynasty and finally, when the 15th century draws near.

Now if you are looking to skip boredom and make Crusader Kings 2 interesting or probably fix some of the bugs in-game, then you can make use of cheats and console commands to get things done easily. They’d give you money, techpoints and huge army to conquer neighbouring kingdoms. So without further ado, here are a list of CK2 console commands and cheats.

How to Open and Use CK2 Console Window

Before we unravel the cheat codes as well as console commands, it’s proper to learn the steps on how to open and use the console window in CK2. So to begin with, fire up Crusader Kings 2 on your PC and once the game starts, simply press the tilde (~) symbol on your keyboard (that’s the key above TAB) to display the console window. 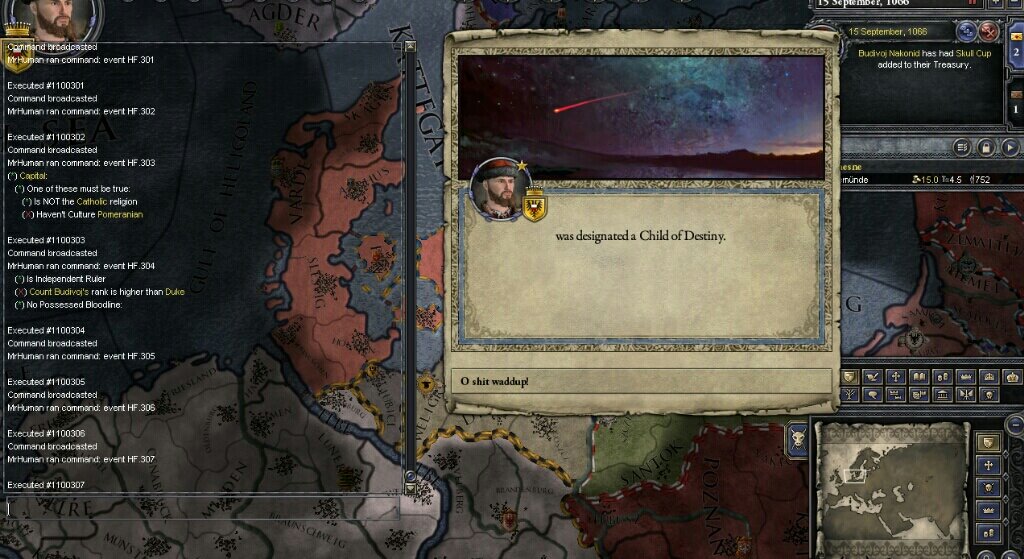 With it opened, you can easily type as many commands as you want and pressing the Enter key will activate them. For instance, the command cash adds a specified amount of money to your inventory, but if you want to get… let’s say 8000, simply type cash 3000 (where 3000 is the amount) into the console window and hit enter.

In Crusader Kings 2, each character comes with a unique number and it’s popularly know as ID. Now assuming you want to change a character’s age, religion or culture, you will need to know his/her ID.

To find character IDs in CK2, simply type charinfo into the console window and hover your mouse on the character’s portraits. Now without further ado, below are a list of all the essential CK2 console commands and cheats.